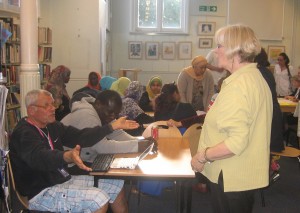 The meeting was chaired by Councillor Jack Hopkins (Councillor Ishbel Brown also attended) and was addressed by Susanna Barnes, head of operations at Lambeth Libraries.

The main topics covered were:

The budget figures for April-June (the first three months of the current financial year) were circulated. These showed that spending was running at one quarter of last  year’s  annual total – ie none of the saving scheduled for 2013/14  ( a total of some £30,500) have yet been made. The cuts are still to come.  Susanna Barnes explained that the savings will very largely be made on the wage bill, and they will happen once the staff restructuring currently under discussion is put into effect – forecast for October. So if the current level of spending on staff is maintained through to end September, the amount left for the last six months of this financial year (taking into account the planned cut for the whole year) is only around £61,000. In other words spending on staff would be running at one third below the level in April to June.

There is limited scope for other savings, but an increase in library income (which offsets spending and is currently targeted to reach £8,400 this year) is possible from hiring out the building for local events/meetings. The conditions and tariffs for this will be available at the next forum (in October).

Building repairs and improvements – INCLUDING THE PUBLIC TOILET

Work is scheduled to start at the end of July on the refurbishment of the public and staff toilets; this will require remedial work on the defective drainage. The work is due to finish in August. This spending will not come out of the £107,000 scheduled for building improvements at TSL this year. Susanna Barnes reported that procurement for this programme is starting (no firm dates were cited). The work may include improvement in the heating and cooling systems (neither are satisfactory): expert advice on this has been obtained by Friends of TSL from one of its local supporters.

A self-service machine will be installed at TSL at the end of summer/early autumn. (This would presumably link in with the scheduled staff restructuring.)

In the next three months “book a librarian” sessions will be introduced, providing one-to-one IT support.

A weekly after-school literacy club for primary school children was run in June/July. This served as a pilot, allowing the requirements to be identified and giving time (over the summer break) for the library to ensure that these are met when the programme resumes in mid-September. One critical requirement that the library must act on is to secure sufficient volunteers (with adequate training back up) to make the programme sustainable. A forum member suggested that an invitation to volunteers be posted on the library website and prominently on a library noticeboard.

The result of the vote on the use of Section 106 money to buy equipment for TSL was reported. The library will now move to secure official approval for the items chosen: a reading machine for people with reduced vision or dyslexia; six tables; 40 chairs for events: e-readers for children’s events. Notice boards outside the library came high on the list of preferences, but Susanna Barnes reported that this could be funded from this year’s refurbishment budget.

Volunteering – how to get the best from local support

The first people have come forward to engage in the library’s volunteering programme. The main example has been support for the weekly literacy club, which has involved six local people. The public at the forum cited significant shortfallings in the library’s engagement of local volunteers: lack of follow up on offers (other than cursory phone messages and not even that in some cases) and inadequate or even absent briefing as to the role required of volunteers. The suggestion was made that the library take up the contact that Friends has sent it at Time Bank for advice on how to manage volunteers and keep them motivated.

Put this date in your diary – Saturday October 12th  2-4pm – when the next public forum will be held at the library. You can then check on how TSL is doing and what is planned.