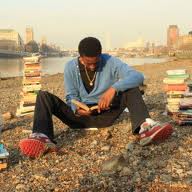 “TEMPEST is both a celebration of contemporary urban youth culture, and a 21st Century re-imagining of Shakespeare’s last great play. 17 young actors from South London struggle to put on a production.

“Their story unfolds alongside Prospero’s as The Oval is transformed into Shakespeare’s magical island and the outcast Duke conjures the spirits in his quest to regain his kingdom.

“In the aftermath of the youth and student uprisings, the Jubilee celebrations and the Olympic Games, TEMPEST is also a contribution to the ongoing debate on English identity”.