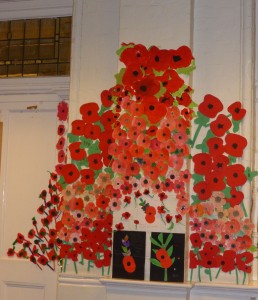 Tate South Lambeth has taken part in the commemoration of the centenary of the First World War war with a trail of poppies – above the entrance lobby and along the walls of the children’s area. All the poppies, many of which contained personal messages, were made by children from Wyvil Primary School.

Not as spectacular as the sea of poppies at the Tower of London – but a moving reminder for all.