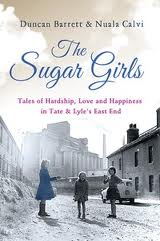 Everyone has a bag of Tate & Lyle sugar in the cupboard and the  Tate family is remembered for the galleries and libraries – including this one that bear their name.
Yet the lives of the ordinary East End girls, some as young as 14, who toiled in the company’s factories and made the Tate’s their fortune, have been forgotten from history.  Until now.
The Sugar Girls: Tales of Hardship, Love and Happiness in Tate & Lyle’s East End tells the true stories of girls who worked at the factories in Silvertown in the 1940s and 1950s revealing the hard work and sometimes hazardous conditions they endured, as well as the friendships, romance and fun that factory life provided.
Come and hear former ‘sugar girls’ Gladys and Eva’ talk  about their experiences, along with authors Duncan Barrett and Nuala Calvi.
THE SUGAR GIRLS – TALK BY DUNCAN BARRETT & NUALA CALVIT
Tate South Lambeth Library
180 South Lambeth Road.
18th June 2012  Doors open 6.45pm.