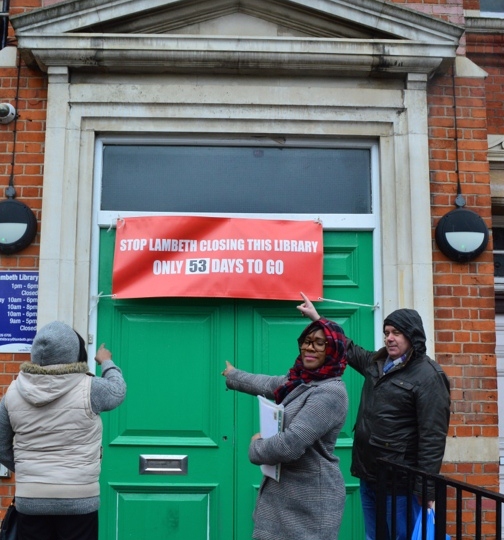 Friends of TSL have recently had  a little battle with the higher reaches of Lambeth Council.

On February 8th – in the absence of any indication that Lambeth Council would abandon its plan to cut off all funding for Tate South Lambeth Library as of April 1st and invest some £1million in  converting it into a gym (with a “community lounge”) – we put up a countdown to closure banner over the library door. This showed how many days are left before April 1st.

“I find it astonishing that Labour Councillors should seek to force the Friends of the Tate South Lambeth library to take down a banner which simply informs the public how many days until the Council will be closing their library. The last time I checked we were living in a free country and not a dictatorship. Just what are the local Councillors trying to hide???”

After a three-week stand off,, Friends took down the banner – to protect library staff from adverse consequences if they did not ensure Council orders were followed , and to prevent a waste of Council funds in paying a contractor to bring down the banner.

Friends of TSL regret being forced to take down the banner, which provides information that local people need, especially the many who depend on TSL’s continuing as a full library. The Council has provided no such information