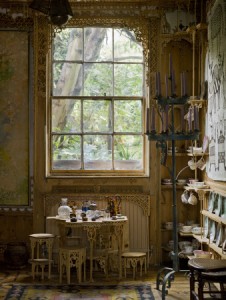 A talk by Tessa Wild, curator of the local National Trust property at 575 Wandsworth Road.

This house was acquired by the National Trust in 2010, because of the rich and striking interiors created by Khadambi Asalache (1935-2006), a Kenyan-born poet, novelist, philosopher of mathematics and British civil servant. He bought the house in 1981 while working at the Treasury, and over a period of 20 years (from 1986) turned his home into a work of art.

Prompted by the need to disguise persistent damp in the basement dining room, he initially fixed pine floorboards to the damp wall. He went on to embellish almost every wall, ceiling and door in the house with exquisite fretwork patterns and motifs, which he hand-carved from reclaimed pine doors and floorboards found in skips.

This talk forms part of the Lambeth Heritage Festival.