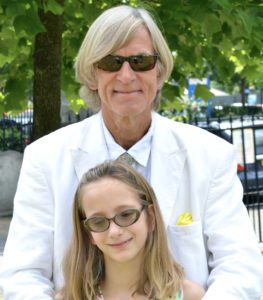 Michael Roc Thomas, the son of Anthony Steel and Patricia Roc, two of Britain’s biggest film stars of the 1940s and 1950s, tells the story of how the birth of a child with a severe visual  impairment changed his life.

A former fashion photographer based in Cape Town, London and Madrid, he had moved to an idyllic location in Sri Lanka in 2000. He was present during  a turbulent period, with the south Asian tsunami of 2004 and the ongoing civil war. It was in  Sri Lanka that his daughter Steele was born in 2006, extremely premature and suffering from retinopathy of prematurity, a condition which usually results in total blindness (think of Stevie Wonder).

The concern that Steele might never see led Michael to start writing silly songs and nursery rhymes to entertain and stimulate his daughter. Over the years Michael’s writing skills progressed, culminating in  Seeing Better Now, a collection of 56 illustrated tales told in verse.

Michael will recount his story, read from his poetry and answer questions.

Copies of the book will be available at the talk. The proceeds are going to a Sri Lankan charity NEST that cares for children with severe disabilities across the island, where public funding is minimal or non-existent.