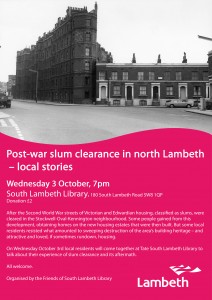 After the Second World War, streets of Victorian and Edwardian housing classified as slums were cleared in the Stockwell-Oval-Kenninnngton neighbourhood. Some people gained from this deelopment, obtaining homes on the new housing estates that were subsequently built. But some local residents resisted what amounted to sweeeping destruction of the area’s building heritage – and attractive and loved, if sometimes rundown, housing.

On Wednesday 3rd October local residents will come together at the Tate South Lambeth Library to talk about their experience of slum clearance and its aftermath.

Organised by the Friends of Tate South Lambeth Library.