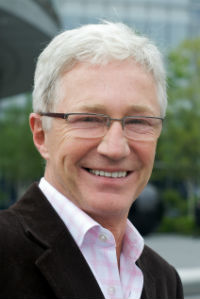 The campaign to save Tate South Lambeth received support from a wide range of local people, including celebrities – Joanna Lumley (who was the poster girl in Friends’ consultation campaign), Will Self ( who addressed the demonstration on March 5th), and Paul O’Grady ( otherwise known as Lily Savage) who sent us this personal testimony:

I once auditioned for the part of a social worker and got the job because I said that I was able to sign- which of course I couldn’t. The library saved my bacon as it had a comprehensive book on signing, complete with illustrations of hands in various poses, and it was thanks to this book that I learned to sign the lines I had to say. I mention this in one of my own books .In fact that little library on the corner is referred to quite a lot in my books as I used it so often when I first moved to London. You’ll probably find I’m still a member if you root through some dusty old archives. Libraries play an important role in the community, particularly for those on a limited budget who can’t afford the luxury of purchasing new books. It’s then that the library proves itself to be a lifeline. It certainly was for me and I strongly believe that we should respect and preserve our libraries.