Biographer of the Tradescants Jennifer Potter is to give a talk at the Tate South Lambeth Library on Wednesday 18th April 2012 at 7.30pm.

The author of Strange Blooms, The Curious Lives and Adventures of the John Tradescants will present In his father’s footsteps: the life and times of John Tradescant the Younger, gardener to King Charles I, exploring the son’s achievements as royal gardener, plant collector and guardian of the Tradescant cabinet of curiosities at South Lambeth, which in effect became Britain’s first public museum.

22nd April 2012 will mark the 350th anniversary of the death of John Tradescant the Younger which saw the end of the brief but extraordinary gardening dynasty that introduced and popularised so many of today’s favourite plants. Tradescant Road and Walberswick Street now stand on the site of the Tradescants’ gardens in South Lambeth so the Tradescant Area Residents Association has teamed up with the Friends of Tate South Lambeth Library to mark the anniversary by organising this free event.

Drawing on her acclaimed double biography Ms Potter will take a sympathetic look at the difficulties the younger man experienced in following in the footsteps of his much loved and much respected father, and end by reading extracts from Advice to a Son, her fictionalised letter from the dying John Tradescant the Elder. Had the son followed his father’s advice, Oxford’s Ashmolean Museum might today be celebrated as the Tradescantian Museum,
and the younger Tradescant might have ended his days a wiser and a happier man.

There will also be an opportunity to ask questions.

In his father’s footsteps:
the life and times of John Tradescant the Younger, gardener to King Charles I
A talk by Jennifer Potter

Jennifer Potter has to date published three novels (set variously in Martinique, the Yemen in 1911, and France) and four works of non-fiction: Secret Gardens; Lost Gardens, written to accompany the Channel 4 television series on which she worked as associate producer and series producer; her double biography of the John Tradescants, Strange Blooms, The Curious Lives and Adventures of the John Tradescants, long-listed for the Duff Cooper Memorial Prize; and most recently The Rose, A True History, heralded by Gardens Illustrated as ‘a remarkable and gripping work of scholarship’ and by the Daily Telegraph as ‘the finest disquisition on the early history and symbolism of the rose’.

Two new works will appear next year: a fourth novel, The Angel Cantata; and Flower Power, her study of seven flowers that have exerted power or influence over human societies. An Honorary Teaching Fellow on the University of Warwick’s Writing Programme, Potter reviews regularly for the Times Literary Supplement and inSeptember returns to King’s College London as a Royal Literary Fund Fellow. 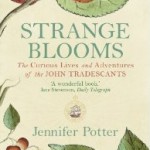 Strange Blooms, The Curious Lives and Adventures of the John Tradescants is available in paperback, published by Atlantic Books, recommended price £9.99, ISBN 978-1-84354-335-0. 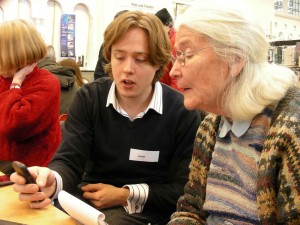 Great for beginners, and also for those with lots of experience who want to explore new programmes or try the latest gadgets.

If you live or work in Vauxhall or Stockwell, just drop in.

Put these dates in your diary

These are the public meetings, held at the library, to discuss Lambeth’s consultation plan for libraries. You can pick up paper copies of this at any library. (Plus feedback forms.)

In the last newsletter we circulated Edith Holtham’s paper spelling out the implications.

If you plan to attend, please email friendsoftsl@hotmail.com

Download a PDF summary of Ferrous Auger’s fascinating talk on the history of Brunswick House, the 17th-century mansion now marooned in the middle of Vauxhall Cross.

Lambeth Council has published a report – Cooperative Libraries – which sets out its proposals for a library service that is “co-produced”  by the council and the general public. It is seeking your feedback – via a questionnaire which you can pick up at the library or fill in online.

The report is lengthy (28 pages) and, at points, very detailed. To help dialogue and debate Edith Holtham, chairman of Friends of Tate South Lambeth Library, has produced the summary below.
There are many questions raised by the report. But there is one overriding one that is not addressed:

In other words, will the six smaller libraries in Lambeth only survive if some community-based organisation takes them on? And what happens if this organisation fails – which it might well do since the Council’s funding commitment does not stretch beyond March 2014?

Summary of the Cooperative Libraries report
The “co-production” idea
The underlying concept of the report is of co-production – defined as “delivering public services in an equal and reciprocal relationship between professionals, people using services and the wider community”.

Co-production in the library service would work as follows.

The report recognises that co-production “requires local people to give up their time to support their local community”. It proposes  to offer a menu of financial and non-financial incentives (such as training and adult education classes) to encourage participation. No proposals are forthcoming on mechanisms – how “citizens and communities” will decide their level of involvement, what are the community organisations that will be involved and how their democratic legitimacy will be ensured.
The report is unclear as to the exact extent of volunteer involvement in day-to-day library operations. It merely suggests that co-produced libraries “consider supplementing staffing with volunteers to add value to library service provision and potentially increase opening hours”

The most significant features of these figures are:

The division of responsibilities
Within the much tighter financial package the budget figures represent, the report affirms that the “standard library service must consist of a baseline offer encompassing the full range of library services and products”. The “intention” is that the contract for each library will incorporate this aim. Within this context the report sets out the roles and obligations of the Council and what it terms cooperative (co-produced) libraries.

The Council will be responsible for  a number of central functions, such as setting the direction and outcomes for the overall library service, ensuring that statutory obligations are fulfilled, providing HR, payroll, legal and IT support (including the maintenance of WiFi).

A cooperative library will have a range of tasks that are essentially day-to-day management – of staff, volunteers. It will be responsible for – among others – building maintenance, insurance, and rates. It is envisaged that the range of services devolved from the Council will increase as cooperative libraries become sustainable.