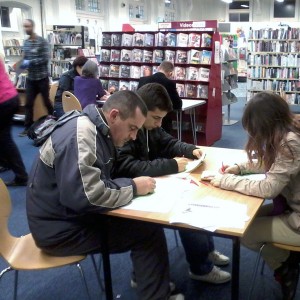 The open day held at the library on 1st November 2012 (part of the “co-design” process, where the local community participates in shaping the future public library service) presented a menu of options and invitations for volunteers.

All these options were based on the consultations earlier this year, and in particular those emerging from the first co-design meeting on August 8th 2012.

You were asked to select your preferred opening times, and indicate your priorities for building improvements and additional services and activities, since not all these can be met from the funds available.

If you did not get to the library on November 1st, there is still time to get your views on board. You can download the forms here (or contact friendsoftsl@hotmail.com requesting the forms and we will email them to you). They are in Word 1997-2003 format so you can fill them in, save them and send them back to us before Saturday 10th November 2012. We will then forward them to the co-design team at Lambeth.

You will join a large number of responses. Lambeth is still counting the forms but some 600 people came through the library doors on Thursday, compared with the normal 40-50 on that day of the week.

The co-design team at Lambeth hopes to develop proposals, taking account of the responses to the November 1st presentation, by the end of this year, with implementation in the first half of 2013.

Many people were responsible for the success on Thursday November 1. High on the list – as far as the team working through the day was concerned – is the Estrela café, which donated a copious mid-day meal. Muito obrigado!