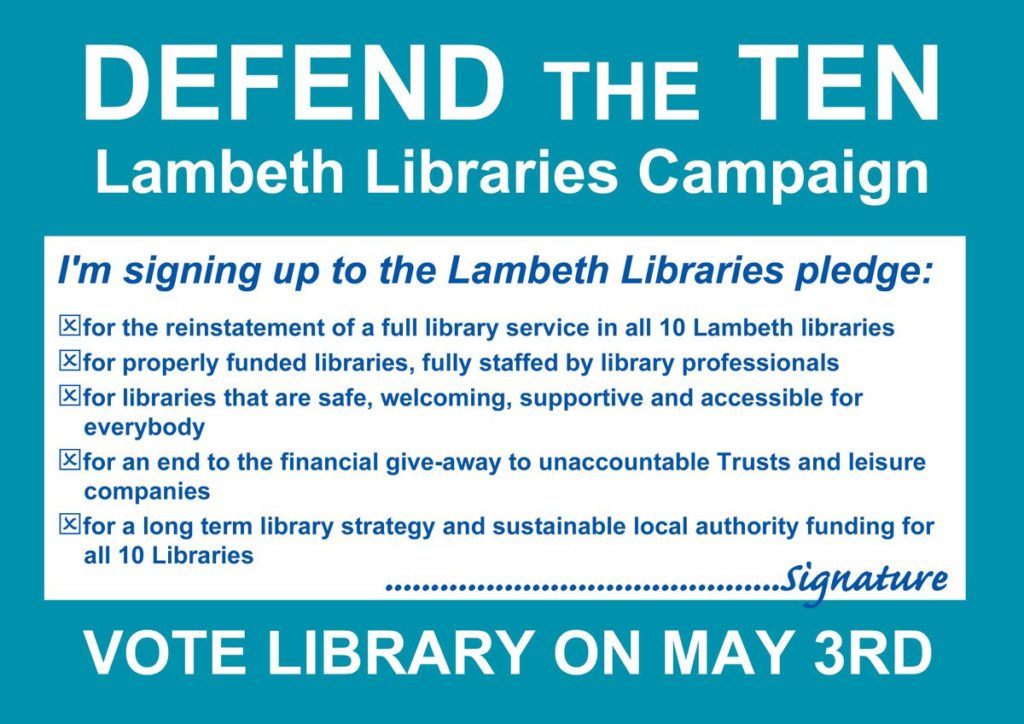 The Defend the Ten campaign, which works to support all Lambeth’s ten libraries, has produced VOTE LIBRARY pledge cards for the local elections on May 3rd.

The card makes five simple demands which, if fulfilled, would put Lambeth’s library service back on a sensible footing for the future.

It boils down to asking for fully-staffed libraries (like Tate South Lambeth) to be maintained, or restored where they have been lost (as at Waterloo). And no peculiar ideas, such as the gym proposed for TSL, which was averted after strong local opposition.

The idea is for residents of Lambeth to approach candidates from all the parties and ask them to sign – any time they are encountered, and definitely when they turn up at hustings!

For those with smartphones, Defend the Ten would love to receive selfies showing candidates with the cards. No doubt the candidates will be happy to do it themselves…

TSL committee member Laura will be collecting the selfies ( at lswaffield1@gmail.com). She would also be grateful to be told about any selfie-less signings. There are hundreds of candidates, so reaching them all will be quite a job.

Paper copies (postcard size) can be picked up at the Friends noticeboards in the library lobby. The pledge can also be downloaded from the Defend the Ten website (http://defendthe10-lambeth.org.uk)

Separately  Friends of TSL have put two specific questions to candidates in Oval and Stockwell – the prime catchment area for Tate South Lambeth library – on their stance on its future.

2. Will you maintain this support if elected as councillor in May 2018?

These are straightforward questions, requiring a yes or no answer.

They are also carefully phrased, to make it clear what sort of library provision we are talking about – full public library service, with permanent on-site professional library staff –ie what we get at Tate South Lambeth Library. We are not talking about a “neighbourhood library”, which is what is currently in place at three of Lambeth’s libraries –  Waterloo, Minet and – incompletely- Carnegie. This is a library facility confined to one room in a mixed use building, and with professional library staff in place only two hours per day. This type of library does not offer constant, on-site support and help from trained librarians, particularly important to novice computer users, nor a safe environment for unaccompanied children, nor the space needed to deliver valuable services to the community such as sessions for school classes, and in TSL’s case advice and training sessions for the visually impaired and classes in English for foreign language speakers.

Current Lambeth Labour policy is to confine full public library service to five locations, with TSL downgraded to a “neighbourhood library”. That is why we have put these questions to candidates in Oval and Stockwell, and why we want clear answers.

Here are the answers Friends of TSL have received as of early April.

Question 1. Yes from the Conservatives, Greens and Lib Dems. No direct answer  from Labour, but an affirmation of current policy.