Naomi Clifford’s recently published book The Disappearance of Maria Glenn tells the true story of the mystery surrounding the abduction of a teenager in 1817. What seemed a simple newspaper report of elopement gone wrong turns out to be a rollercoaster story of crime, coercion, illusory triumph and fraudulent defeat.

The author will talk about this book, and also about the work she is now researching – on women who went to the gallows in the early 19th century.

Naomi has lived in Stockwell for 25 years and is a well known community activist and writer.Under the name Naomi Lourie Klein, she wrote These Were Our Sons: Stories from Stockwell War Memorial, published in 2012. 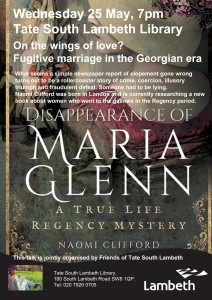 This talk is jointly organised by the Friends of TSL and Lambeth Libraries, forming part of May’s literary festival at Lambeth libraries.