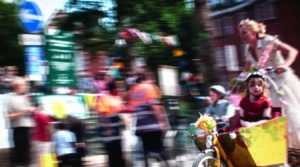 Newsreel is a series of movies about London (including Kennington). Commissioned by Sadler’s Wells and Arts Council England, the reels went out across London and the UK. Initially as a series of movies and talks, they were added to and updated before each cinema screening as events happened. The film has a duration of 64 minutes and will be followed a question and answer session with the filmmaker Alex Reuben.

Alex Reuben has a background as a DJ and in art and design. Reuben’s films combine dance, music, politics and painting. They are characterised by their use of improvised sound and movement within architecture, a process he calls ‘choreogeography’. Alex is currently featured on the BBC and ACE arts website, ‘The Space’