June 2014 saw the first three sessions of  a programme organised by Tate South Lambeth manager Maria Kwofie, where local people have shared their memories and experiences during World War II with children from local primary schools.

This response has been very positive – on both sides. The panel of up to nine local “veterans” has been warmed by the interest and receptiveness of the young children, who have clearly been stimulated by contact with people who have first hand experience of this major historical episode.

A further session is planned for before the summer holiday, and more afterwards, including secondary school children. Friends of TSL has meanwhile proposed to organise a similar event for the general public, with members of the audience invited to contribute their memories. The aim is to stage this in April next year, in the run-up to the 70th anniversary of the ending of the war in Europe. 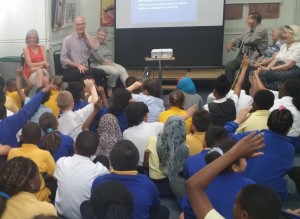