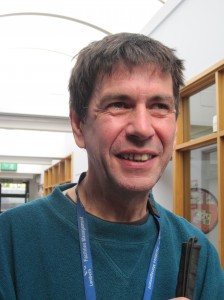 Roger Lewis, the trainer at the Visually Impaired People (VIP) project at Tate South Lambeth Library run by Christina Burnett of Digital Tuesdays, has been selected as a finalist for the TalkTalk Digital Heroes Award 2012.

Now in its fifth year, this award recognises people who harness digital technology to bring about positive social change in their communities

Lambeth Disability officer Roger is blind and helps VIPs to use the internet and other digital technology.

If he wins, Roger’s £5,000 prize will help buy access technology for Tate South Lambeth Library. So vote for Roger at www.talktalk.co.uk/digitalheroes/region.php?region=london.