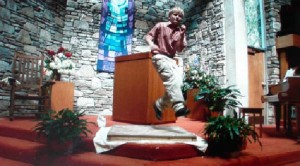 ‘As a DJ, people asked me where I learned to dance. I didn’t know so I went to find out’ – Alex Reuben

Commissioned by Arts Council England, Alex Reuben’s debut feature Routes: Dancing to New Orleans, is a road movie through the dance and music of the American Deep South.

Alex Reuben has a background as a DJ and in art and design. Reuben’s films combine dance, music, politics and painting. They are characterised by their use of improvised sound and movement within architecture, a process he calls ‘choreogeography’.

Alex is currently featured on the BBC and ACE arts website, ‘The Space’.