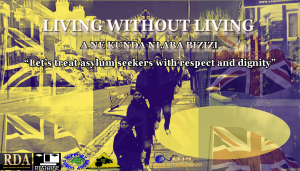 documentary about the creation, development and construction of the Caribbean musical instrument invented in Trinidad and Tobago.   Screened at the 7th Montreal Black Film Festival

“LIVING WITHOUT LIVING” (2011), 16mins, a short documentary film about the life destitute asylum seekers in the UK produced as part of Respect and Dignity for Asylum Seekers Campaign sponsored by British Refugee Council.